The toll of 809 deaths in one day is the lowest in Spain for a week.

Meanwhile, officials are trying to get masks for all citizens as part of plans to eventually ease restrictions.

Face masks are currently almost impossible to get hold of in Spain. The government had previously said they served little purpose outside hospitals.

However, views on wearing masks appear to be shifting in Western countries, with US health authorities on Friday recommending their use in public. Austria, the Czech Republic, Israel and Turkey have also mandated the use of masks in various public places.

Globally, more than 60,000 people have died in the pandemic and more than 1.1 million have been infected, Johns Hopkins University in the US says.

What is the latest from Spain?
Officials say 7,026 people have been diagnosed with the coronavirus in Spain in the past 24 hours – down from Friday’s figure of 7,472.

Addressing the nation, Mr Sánchez said extending the lockdown for two weeks was necessary to give the health service time to recover.

“These are the most difficult days of our lives,” he said.

Once the number of new infections was under control a “progressive return to a new normal” would get under way to rebuild the economy, he said. New hygiene, detection and tracing measures would be in place.

He also called for European unity to tackle the economic consequences of the pandemic. “Europe must not fail this time,” he said. 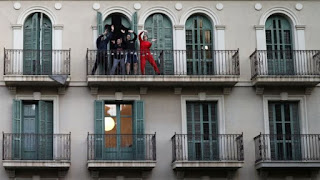 “It is clear that the Spanish economy will have to go into debt and we will have to take resources from future generations to tackle the pandemic,” he added.

So far the EU has been unable to agree on a plan to share out coronavirus-incurred debt in the form of special bonds – dubbed coronabonds – despite pleas from Spain, Italy, France and others.

Coronavirus outbreak eats into EU unity
The Madrid region has been Spain’s worst affected area. Care homes have seen large-scale outbreaks leading to a collapse in staffing. In two facilities alone there are reports of almost 90 deaths linked to the crisis.

Last month the military was called in to help at retirement homes and found elderly patients abandoned and, in some cases, dead in their beds.