Home World News Coronavirus: New York using mass graves amid outbreak
Share on Facebook
Tweet on Twitter
Workers in hazmat outfits were seen using a ladder to descend into a huge pit where the coffins were stacked.

The location is Hart Island, used for New Yorkers with no next of kin or who could not afford a funeral.

New York state now has more coronavirus cases than any single country, according to latest figures.

The drone footage comes from Hart Island, off the Bronx in Long Island Sound, which has been used for more than 150 years by city officials as a mass burial site for those with no next-of-kin, or families who cannot afford funerals.

It is probable that many of the coffins are for coronavirus victims, but it is not clear whether they fall into the above categories.

Burial operations at the site have ramped up amid the pandemic from one day a week to five days a week, according to the Department of Corrections.

One virus, two Americas
Four out of five jobs affected by virus globally
Prisoners from Rikers Island, the city’s main jail complex, usually do the job, but the rising workload has recently been taken over by contractors.

New York City Mayor Bill de Blasio indicated earlier this week that “temporary burials” might be necessary until the crisis had passed.

“Obviously the place we have used historically is Hart Island,” he said.

The number of coronavirus deaths in New York state increased by 799 on Wednesday, a record high for a third day. 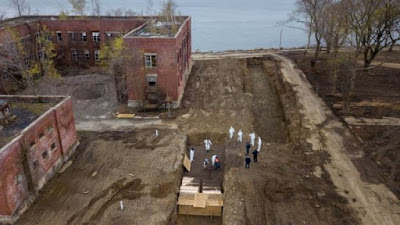 But Governor Andrew Cuomo took heart from the fact that the number of Covid-19 patients admitted to New York hospitals dropped for a second day, to 200.

He said it was a sign social distancing was working. He called the outbreak a “silent explosion that ripples through society with the same randomness, the same evil that we saw on 9/11”.

Another glimmer of hope was heralded on Thursday as official projections for the nationwide death toll were lowered.