Beyond that, though, Krishna delivered a bold proclamation. He said he wants the company to grow, and not just on the bottom line.

“We can talk about which is important, is it growth, or is it only EPS [earnings per share,or is it only liquidity,” Krishna said on Monday’s call.

“Liquidity is essential, and without that, no company is going to survive through the next period. I don’t know how long that period is going to be, so I think our obsession with that is going to serve us well in this period, but what you’re hearing me say is that growth has to be an equal obsession to other metrics that are there if we’re going to go do that.”

The remarks are notable given the way IBM performed under his predecessor, without an economic crisis. In the past five years, according to FactSet, IBM produced adjusted earnings that beat analysts’ estimates every single quarter. But revenue came in ahead of expectations only about half the time.

Moreover, IBM had a streak of more than five years, from June 2012 through September 2017, where revenue declined on an annualized basis every single quarter.

Along the way, IBM’s company’s stock price fell 42% under Rometty’s tenure going back to January 2012. 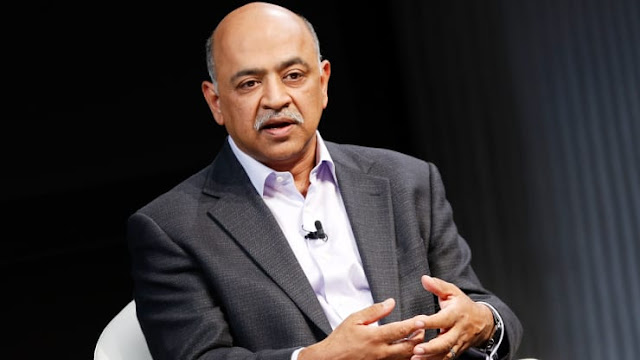 Now Krishna appears to be taking a different view. If things work out as he’d like them to, the company could improve its position in the technology industry, where it has struggled to compete against tech powerhouses like Amazon, Microsoft and Google in cutting-edge areas like cloud computing and artificial intelligence.

Revenue growth could come in part through dealmaking, just as it has at Salesforce and other enterprise technology companies.

Acquisitions certainly happened in the Rometty years, including Red Hat, which Krishna engineered alongside Rometty. In the first quarter while IBM revenue overall declined 3.4%, Red Hat revenue rose 18% on a normalized basis. Krishna sees IBM continuing to buy companies. It’s just that he might be more willing to buy companies for growth rather than immediate earnings injections.

“It doesn’t have to be accretive on month one, or day one,” he told analysts.  “As long as it’s a healthy business, provides us a growth profile and provides us the ability to get sufficient synergy both for IBM and for the property itself, both have to be winners. It cannot just be one otherwise it’s not that attractive.”

It’s not clear how much revenue growth IBM will be able to yield from products its engineers build internally. But it’s cler where he’s trying to focus growth: Krishna repeatedly said on Monday’s call that the most important areas are hybrid cloud (the Red Hat deal will help there) and artificial intelligence.

The company’s shares dipped about 3% after hours following its earnings report.