India’s population of 1.3 billion was given less than four hours’ notice of the three-week lockdown on Tuesday.

Officially about 900 people have coronavirus in India.

However, experts worry that the real number of infections could be far higher. India has one of the lowest testing rates in the world, although efforts are under way to ramp up capacity.

There are fears that an outbreak in the country – one of the world’s most densely-populated – could result in a catastrophe. So far 20 people are reported to have died.

People are banned from leaving their homes under the “total lockdown” measures.

However, there have been reports of long queues and panic buying as people struggle to get supplies.

Meanwhile, millions have been left jobless and without money by the shutdown, sparking an exodus from major cities. 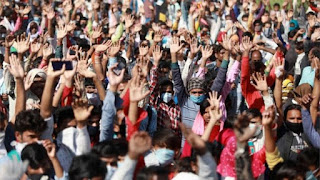 Thousands of migrant workers are walking long distances back to their villages after transport was stopped.

Several state governments have promised cash handouts. Uttar Pradesh in the north is putting on buses to help stranded workers.

But there are concerns about the logistics of delivering the aid.

The government had already put in place a “comprehensive response system” at its borders before the World Health Organization (WHO) declared the coronavirus a public health emergency of international concern on 30 January, it added.

Meanwhile, the virus continues to spread rapidly in other countries around the world.

The city in China where the coronavirus pandemic began, Wuhan, has partially re-opened after more than two months of isolation. People are being allowed to enter but not leave, according to reports.
Nearly 600,000 infections have been confirmed globally and almost 28,000 deaths, according to figures collated by Johns Hopkins University
The death toll in Spain has exceeded 5,000, after it reported 832 more fatalities in the past 24 hours. Spain is the world’s worst hit country after Italy
The US now has the highest number of confirmed infections at 104,000

South Korea says that for the first time it now has more people who have recovered from the virus than are still infected. It reported 146 new cases on Saturday, taking the total to 9,478 – of whom 4,811 have been released from hospital

Russia and Ireland are among the latest countries to bring in new restrictions to try to slow the spread of the virus. In Russia, shopping centres, restaurants and cafes have been ordered to close. In Ireland, people will have to stay at home with limited exceptions for the next two weeks

In the UK, frontline National Health Service staff in England will begin being tested this weekend to see if they have coronavirus

H.R. McMaster’s father died in a Philadelphia nursing home. A nurse has been charged in his death.

A former NFL player was arrested after he said police mistook a phone for a gun. The officer has been fired.