Home Business Stocks in Europe Open Higher as Investors Brace for U.S. Jobs Data:...
Share on Facebook
Tweet on Twitter
New U.S. data is expected to show millions more filing unemployment claims.
Each day seems to bring unwelcome economic milestones. Another is expected to arrive Thursday with the fourth-straight weekly tally of new unemployment claims likely to be in the millions.

Ahead of the Labor Department report, due at 8:30 a.m., the consensus estimate cited by Bloomberg is 5.5 million new unemployment claims. Torsten Slok, chief economist at Deutsche Bank Securities, is expecting a number around eight million. His assumption is based on the earlier inability of many workers to file claims because of technical glitches at overwhelmed state labor departments.

If Mr. Slok’s estimate is right, it would bring the cumulative U.S. job losses to 25 million.

“All of the last decade in job gains will be undone in four weeks, which is a truly stunning statistic,” he said. “It tells you the severity of the situation.”

And it will be only the latest measure. On Wednesday, the Commerce Department reported the steepest monthly drop in retail sales since those statistics started being compiled nearly 30 years ago, and the Federal Reserve said industrial production had recorded its biggest decline since 1946.

The mounting unemployment numbers seem certain to fuel the debate over how long to impose stay-at-home orders and restrictions on business activity.

President Trump has said some measures should be relaxed soon because of the impact on workers. “There has to be a balance,” he said at a news briefing Wednesday evening. “We have to get back to work.”

Global markets were mixed on Thursday after Wall Street’s slump, with investors expecting new government and corporate figures to further detail the economic damage from the coronavirus outbreak.

European markets opened higher after broad drops in Asia, which followed a 2.2 percent tumble in the S&P 500 on Wednesday. Futures markets were predicting that markets in the United States would open higher.

Investors were bracing for what was expected to be another spate of bad economic news. Weekly unemployment claims data in the United States was expected on Thursday to show another mass shedding of jobs, and more companies are scheduled to report the hit to their financial results during the first three months of the year. 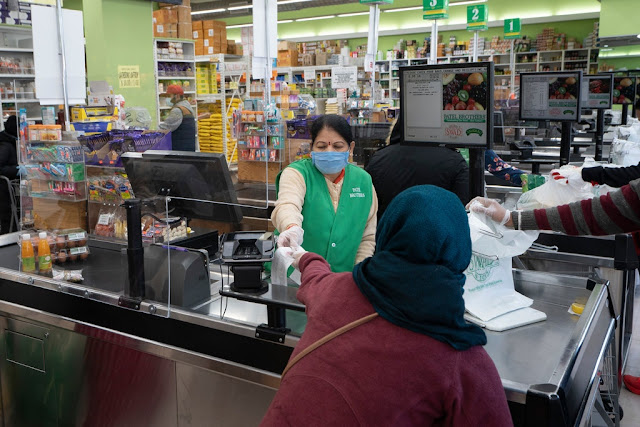 Volkswagen, Daimler and Volvo to reopen factories.
European carmakers are beginning to gradually reopen factories in what will be an important test of whether it is possible to get the economy going again without endangering the health of employees.

Volkswagen, which has already restarted limited production at some parts factories, said late Thursday that it would reopen car assembly plants in Zwickau, Germany, and Bratislava, Slovakia, on Monday. Other VW factories around the world will follow later in April and in May.

Daimler, the maker of Mercedes-Benz cars and trucks, said that next week it would reopen three German factories that manufacture vital parts, such as a system made in Berlin that controls the valves of internal combustion engines. The plants will initially operate for one shift a day as Daimler gradually restarts operations in Germany, the company said.

Volvo Cars said it will reopen its factories and offices in Sweden on Monday. Sweden has taken a more relaxed approach to the virus, allowing grade schools and restaurants to remain open.

More than 1 million Europeans are either working reduced hours or unemployed because of car and parts factory shutdowns, so restarting the plants is crucial. But the factories will also be laboratories of whether the risk of infection can be controlled by use of face masks, plastic barriers, and other measures.

A troubled Chinese conglomerate tells investors about its debt woes.

As China’s economy struggles with the coronavirus outbreak, a famously debt-laden company illustrates the risks of the country’s addiction to borrowing.

HNA, a conglomerate that borrowed heavily and then ran into difficulties in recent years, has blamed virus-related flight cancellations across China and the world for mounting debt woes that led it to ask the Chinese government for a bailout in February. This week, the airlines-to-insurance behemoth said that the pandemic had brought it to the “point of life and death.”

In an apology letter to investors, HNA said that it would be forced to skip regular payments on one bond, delaying the interest and principal due by one year. The company also gave a glimpse into internal struggles by publishing an anonymous letter criticizing its own finance department for bungling a hastily arranged call to some of these investors.

HNA said that not all investors were notified of the call. It promised to “disclose relevant information more openly and transparently” in the future.

The global economy may be permanently changed, even after it recovers.

Who would have thought that a crisis that began with mortgage defaults in American suburbs in 2007 would lead to a fiscal crisis in Greece in 2010? Or that a stock market crash in New York in 1929 would contribute to the rise of fascists in Europe in the 1930s?

In the years ahead, we will learn what happens when the infinitely complicated web of interconnections that makes up the world economy is torn apart. And it opens the possibility of a global economy completely different from the one that has prevailed in recent decades.

“This is a period of radical uncertainty, an order of magnitude greater than anything we’re used to,” said Adam Tooze, a historian at Columbia University and author of “Crashed,” a study of the extensive global ripple effects of the 2008 financial crisis.

Crises have a way of bringing to the fore issues that are easy to ignore in good times.

One obvious candidate is globalization, in which companies can move production wherever it’s most efficient, people can hop on a plane and go nearly anywhere, and money can flow to wherever it will be put to its highest use. The idea of a world economy with the United States at its center was already falling apart, between the rise of China and the United States’ own turn toward nationalism.

There are signs that the coronavirus crisis is exaggerating, and possibly cementing, those changes.

For more than four decades, China has never acknowledged that its economy actually shrank, even during major economic crises. But that may change on Friday, when the country announces gross domestic product for the January-to-March quarter.

China’s National Bureau of Statistics already confirmed last month that domestic industrial production, retail sales and investment all suffered record, double-digit drops in the first two months of this year compared with the same period of 2019. That has prompted most, though not all, economists to guess that overall economic performance for the first quarter of this year will show a drop from a year earlier.

The question is how big a drop it will be.

One survey of 18 Chinese and foreign institutions by Caixin, a Chinese news organization, found that they were forecasting that the economy was anywhere from flat to down 11.5 percent in the first quarter. The average forecast was for a drop of 6.6 percent.

A broader survey by Reuters of 57 analysts found an even wider range of predictions — anywhere from a nose-dive of 28.9 percent to a gain of 4 percent. But the average in the Reuters survey, a loss of 6.5 percent, was practically identical to Caixin’s.

Foreign banks, which come under only slightly less political pressure than Chinese institutions to issue sunny forecasts, have tended to be at the bearish end of the range.

United Airlines warns its workers of a grim future.

The leaders of United Airlines issued a dire note to the carrier’s 100,000 employees on Wednesday, warning that staffing cuts may be coming and demand for air travel is likely to remain subdued into next year.

“The challenge that lies ahead for United is bigger than any we have faced in our proud 94-year history,” the airline’s chief executive, Oscar Munoz, and president, J. Scott Kirby, wrote in the letter, which was posted on the company’s website.

Traffic in the first two weeks of April was down 97 percent from last year and the airline now expects to fly fewer passengers in all of May than it flew in a single day during the same month last year, the executives wrote. And that decline is expected to last even as health concerns linger and travel restrictions are lifted at different times around the world.

The airline said earlier on Wednesday that it expected to receive $5 billion of federal funding intended to pay airline workers through September, but that stimulus is unlikely to prevent cuts beyond that, the executives warned on Thursday.

“The challenging economic outlook means we have some tough decisions ahead as we plan for our airline, and our overall work force, to be smaller than it is today, starting as early as October 1,” they said.

The leaders struck a markedly different tone from the chief executive of American Airlines, Doug Parker, who said in a CNBC interview earlier in the day that he saw some “indications that the world is ready to start traveling again.”

Amazon will suspend operations in France over a labor dispute.

Amazon said Wednesday that it would temporarily halt its operations in France after a court ruled the company had failed to adequately protect warehouse workers against the threat of the coronavirus and that it must restrict deliveries to only food, hygiene and medical products until it addressed the issue.

Amazon contested the findings of the ruling, handed down Tuesday by a civil court outside of Paris, and said it would appeal. The court had given the company a deadline of Wednesday evening to carry out the order or face a fine of 1 million euros (nearly $1.1 million) per day.

“We have suspended activities in our distribution centers in France, despite the huge investment we have made to ensure and strengthen safety measures for our employees,” Amazon said in a statement, adding that it was “perplexed” by the court’s decision. The threatened fine was too steep to risk not complying, Amazon added.

The company lashed out at unions that had brought the court case despite what it said was “concrete evidence” that it had worked to strengthen safety measures at its six mammoth warehouses around France. The ruling “is likely to have consequences for many people in our country,” including thousands of employees, Amazon customers and French businesses that make sales on Amazon’s platform, it added.

Laurent Degousée, a representative of SUD-Commerce, the main union that filed the lawsuit, said he had learned that Amazon was expected to halt its French operations as of Thursday for five days to enhance safety measures and provide its 10,000 workers full pay during that time. Amazon did not provide details on the furloughs, but said it was asking employees to stay home this week, and that it would assess the implications for its French operations.

Catch up: Here’s what else is happening.

Gov. Gavin Newsom of California signed an executive order Wednesday directing the state’s unemployment agency to pay benefits to workers like drivers for Uber and Lyft through a federal assistance program for the self-employed. He said the state would also extend aid to undocumented workers, many of whom have been unable to get federal relief during the pandemic despite paying local and state taxes.

UnitedHealth Group, one of the nation’s major insurers, reported that its earnings increased this past quarter, adding that the costs of the pandemic were offset by the cancellations of routine medical appointments and elective surgeries.

The Paycheck Protection Program, a federal program to help small businesses weather the pandemic, is in danger of running dry amid a disagreement between congressional leaders and the White House over how to replenish it.

A Smithfield Foods pork plant in South Dakota has at least 640 coronavirus cases and is now the biggest new, single-source Covid-19 hot spot in America.

Investors warned not to rush into travel and leisure stocks